My son, when he was a little younger, attended a drama group where they played this simple game. 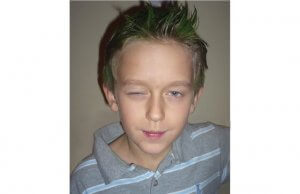 As you can see, from the picture above, he’s a picture of innocence! He would often re-inact some of the deaths after the class. Nice.
He loved it, this is a great ice breaker, especially when kids don’t know each other that well.

How to play wink murder:

The children are asked to take a slip of paper out of a hat, enough for one each – on one slip is written – ‘You are the wink murderer’. On another, ‘You are the detective’. All the others should say ‘Innocent bystander’.

Alternatively you can get them to stand in their circle with their eyes closed and tell them that one tap on the shoulder means they are the murderer, two for detective.

They then stand in a circle, with the detective in the middle. When they are all ready, the murderer sets about his business. He has to catch someone’s eye and wink at them without letting the dectective cotton on. The person who has been winked at has to drop down dead as dramatically as possible – this is the bit the kids like most! Lots of ‘aaaarghhhhs’ and ‘harrrrssssphutt-phutt…errr’ groans should be heard – the louder the better.

The detective has to try to catch the murderer before everyone has died! If they suspect someone they should point and say in a big voice “I arrest YOU in the name of the law!” If they are correct they could pretend to handcuff and cart them off to jail. If incorrect the detective has to close their eyes for one or two more deaths, depending on the size of the group.

A treat can be given for either the murderer who has managed to kill everyone without getting caught ..uh-hum, yes, not very pc… or for the detective if they have successfully identified the culprit.