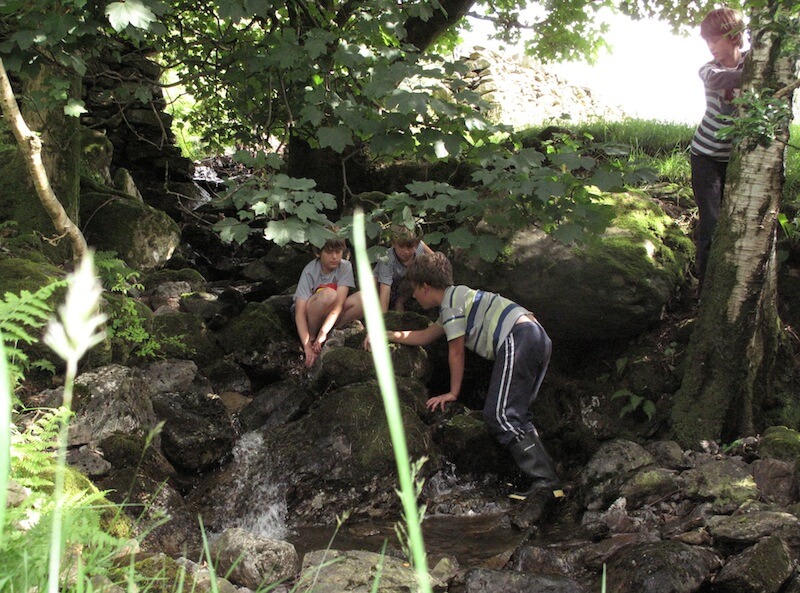 What was your outdoor play when you were a child?

How many parents born before 1980 had outdoor play time as a child? I remember many summers getting on my bike with a friend or two and cycling a mile (or two) to the local river to play by the weir. The weir!!

We spent hours, usually playing with sticks and stones. We must have had conversations, though I don’t remember them, and ate the squashed sliced white bread peanut butter or jam sandwiches that our mums must have made us. Sometimes we would just sit and stare at anything that passed us by.

One time we cycled on the verge of the A3 (the wrong way, opposite to the traffic) to the Happy Eater so we could guzzle knickerbocker glories. It was ok, we were quite safe enough, there were mainly a lot of stationary cars – massive traffic jams puffing out bellows of lead fueled fumes.

Roll on 15 years… uh-hum… or so and I became a parent myself. Would I let my child do the same – hell NO!

Because looking back I remember the near scrapes. The scariest were those of random adults approaching us and trying to engage us in conversation. Most we knew were harmless but on the ‘odd’ occasion we felt something wasn’t right. Maybe these were good life lessons but hearing news when the outcomes weren’t great there was little chance I would put my own children at that kind of risk.

So did it stifle their ability to play outdoors? Well, yes and no.

Generally we went with them. To parks, rivers, woodlands, fields, with and without their friends, mainly with, and sometimes as families together. They would have their outdoor play, and we would sit some distance away with a cup of tea and let them carry on, trying not to interfere, or we’d all go for walks.

I recognise however this isn’t the same. Any scrapes or fall-outs they could come running to us for assistance, not diplomatically trying to work it out for themselves, or how to fix things. And they never had the time to make camps that they could return to, day after day, all summer long. 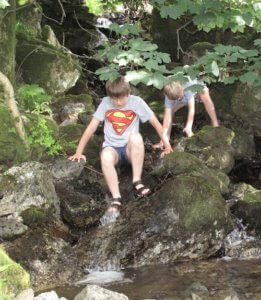 It’s trying to get the balance right so that children are safe, but are able to learn social skills and have fun playing.

Personally I think our kids thrived ok, but it is just harder, more work and less freedom – for the adult! Instead of being able to have a child free house to get on with chores, diy or maybe a sneaky snooze, we were constantly having to think of things to do with them. Fortunately living in West London at the time there was a lot available to do. The temptation though to let them live off the tv or computer was very great, it’s an effort to take three children somewhere to play when all you want to do is relax.

So it took our freedom as adults much as it took our children’s. It also landed us with a heavy dollop of guilt, that we could’t give our children the same opportunity to escape their parents as we could ours.

Hard though it may have been at the time, we are a close family and have some great friends, and I know our children loved their early years as much as I enjoyed sharing it with them. I do find, now they’re young adults, the letting go stage is difficult, something I don’t think my parents ever felt, or maybe that was just me!