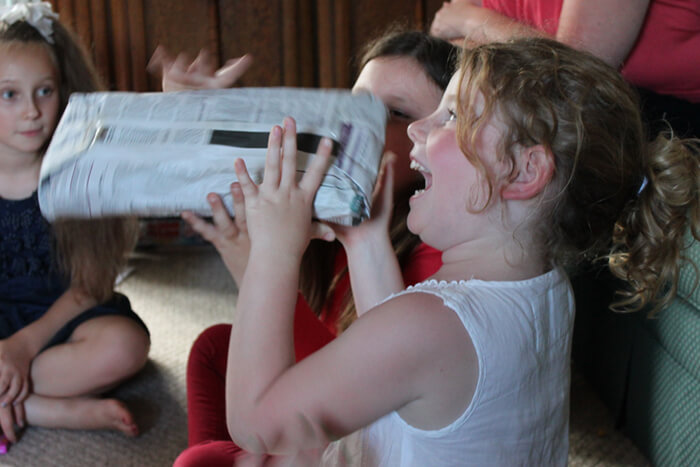 Pass the Parcel, as you may know, is an all time favourite party game and one of ours too. Which is why we include it in all our wonderful Children’s Birthday Parties, take a look. It’s a simple way to host a party at home.

For all our kids party productions we create the music and we’ve added our own little twist – Reverse Pass the Parcel. Two very different styles of music – one to go clockwise, the other anticlockwise. It’s an easy way for anyone to put their own little twist to Pass the Parcel. So if you want to try something a little bit different, or want to incorporate it into your own party theme, it needn’t always be passing a parcel round one way – you can spice it up a little. There are many other alternative pass the parcel ideas too.

Here are a few ideas to get your imaginations going:

Dressing up. One idea we love, and works well with small groups.

Fill a draw-string bag full of fun dressing up clothes, these could contain things like red noses, deely boppers, animal noses, wigs, hats, shoes, scarves, long socks, the louder in colour and sillier the better. At many charity shops you can pick up all sorts of fun dressing up clothes for very small outlay. An oversized jacket can look very funny on a small child, as can high heeled shoes.

Place all the items into the draw-string bag, it has to be non see-through to be passed round. Or maybe something like a box with flap with a small opening can be set in the centre and pass round a different object like a wooden spoon. As the music stops one item gets drawn and worn. You could suggest to the children that with each item they have to wear the item stand up and do a little action to go with the clothing or perhaps get them to parade round the outside of the circle like a catwalk.

Tasks. A different take on the above is to write out actions on a slips of paper, fold them up and place in a small drawstring bag. For younger children make the actions very simple like ‘Jump! Hop! or Pat your Head!’

To make life very simple you could write them on the reverse side at the back of a note or sticky pad. Each time the music stops the child has to remove one note and do the task written on the paper.

It could be fun things like eat a chocolate, or not so nice things such as eat a tomato, or read a paragraph from a ridiculously difficult text book, or moderate things such as brush someone’s hair, anything that you can think of that may create a giggle.

Pass the Parcel charades can also be played this way too. Use films or books you know all the children will have seen – or a fun one would be that they had to impersonate someone they all know such as a film star, singer or teacher!

Picture Treasure Hunt/Pass the Parcel/Tombola Combo. Here’s another, similar to the above and a neat little idea. It can be made easier, or more difficult according to the age of the children.

Take pictures of objects from around the room, house, or even garden and print onto a piece of paper, cut them out, fold them and place them into the bag (see above). If you haven’t a printer, are good with tech and trust children not to damage your phone, you could pass your phone around telling them to look at the next picture when the music stops. Make it clear that your phone is not the prize… eek!

Depending on the age make the pictures very obvious or take a close up shot of part of an object, or make it blurry to make it more difficult. Each object could have a number hidden on, or next to it. Once they have matched up the object to their picture they then have to find their number matched with a ‘goodie’ pre-prepared table. 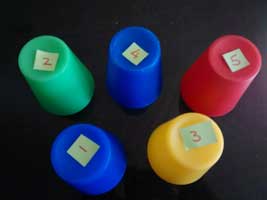 Sweets under cups with numbers on works well if you want to give surprise goodies.

If it does get very difficult you may have to play hotter, colder to help chivvy them along a bit. Say ‘hotter’ as they get nearer, ‘colder’ as they move away. Of course this is going to be easier for children familiar with the surroundings.

Alternatively, hide an item of clothing where the picture is taken, they then have to wear that item. The child wearing the most items at the end is the winner.

Play the fishing rod game. This can be easily made if you haven’t got the children’s toy to hand.

The children pass a (fishing rod) stick round. The stick, with some string or cotton with a magnet attached has to fish for a few lightweight card ‘fish’ with paper clips on them. If the group is large it is best to have more than one rod – in fact it makes it fun when they become competitive and the magnets get attracted to one another.

Number the fish, set a little clue, or picture cards and again reward with prizes. Alternatively, have them face down and write tasks on them.

Pass the silly hat…or a microphone Each time the music stops the player has stand up to sing along to a song whilst wearing the hat – great for a themed party, have the backing track ready. Make it contemporary but silly and tell them the loudest wins. Wear earplugs.

More traditional but still with a twist. A parcel is handed round, along with the odd treat there’s a forfeit. These can be anything from cleaning a pair of shoes, eating a gherkin/pickled onion/any green vegetable, sweeping up with a dustpan and brush. They will need to be short and sweet, cleaning the car might be pushing it.

One of our favourites. A pass the parcel with a treasure hunt.

In each wrap is a clue to where the ‘treasure’ is. If you want to personalise it so that only one child goes to search for it, add a child’s name to the top of the clue. This makes it more orderly but you will have to decide who keeps the treasure. Will it be the child whose lap the parcel landed on and who read out the clue, or the child who went to find it? Or leave two ‘treasures’ for both?

Sample of a clue:

Your treat is hidden, where can it be?
I like two sugars with a cup of T_ _
(then hide the treat near to your tea making items or in a mug or teapot for example)

Once you’ve got the hang of these it’s not too difficult. Think backwards is my advice, where you want to leave it and find words to rhyme.

For younger ones have a lucky dip instead. It’s still possible to have use some of the elements of pass the parcel.

Have ready in the centre a lucky dip, a box filled perhaps with parcel packaging, or shredded paper, and the treats. Then pass an object round the room instead. This will solve the problem of having to unwrap one layer which young ones find difficult. Instead pass something like a teddy – when the music stops you could say, “Teddy says go and see, if you are going to be luck-y”

For very young ones just have a lucky dip. Life is too short to get them sitting in a circle!

If you have played similar party games to Pass the Parcel or can think of another please do let us know – we love to share.. except perhaps our chocolate.

For those interested, we sell Themed Treasure Hunt Pass the Parcels here.